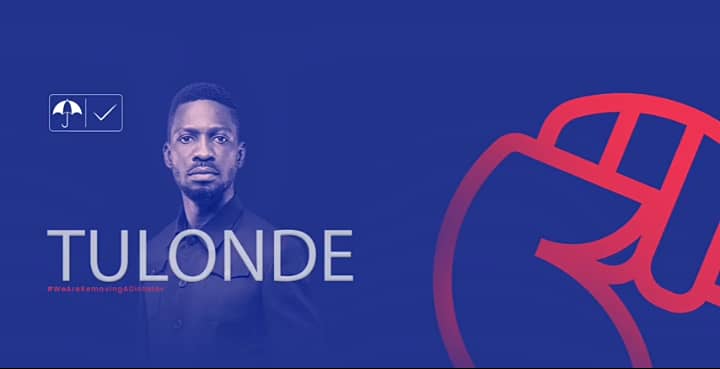 "Ghetto People, 35 years of gun rule is about to come to an end. Remember it is your vote that is going to deliver you the change that you so badly need. This one is a clarion call to everyone above eighteen and registered to vote"

In the song, 4:24 minutes long titled “Tulonde” Kyagulanyi asks Ugandans to vote so as to get the change they need. The chorus bares a message to voters to turn up in large numbers.

In the song, Kyagulanyi narrates a journey of "tear gas and bullets" that started in November 2020 when he was nominated as a Presidential candidate. Since then, he says his campaigns have been foiled by security and the Electoral Commission which he says has treated them unfairly.

He says while the commission leaves other candidates to campaign, those from the opposition are jailed and detained.

Kyagulanyi and Forum for Democratic Change-FDC Presidential Candidate Patrick Oboi Amuriat have often collided with security for flouting COVID-19 guidelines especially against holding processions and attracting crowds in disregard of the physical distancing rule. In November 2020, Kyagulanyi was arrested in Luuka district and detained in Nalufenya. His arrest prompted riots in different parts of the country during which at least 54 people died.

He was later arraigned before court and charged with doing acts with potential to spread a contagious disease and was granted bail.

Kyagulanyi while singing about the unfairness they have faced in this Campaign makes reference to his colleagues, Ali Bukenya alias Nubian Lee and Eddy Ssebufu also known as Eddie Mutwe who were arrested last month on the campaign trail in Kalangala. The two are still in prison with more than 50 other Kyagulanyi supporters.

The song's introduction on You Tube, on Best Shoots page where the New Official Music is, reads "This one is dedicated to brother Nubian Li and all the comrades that are in prison for no reason. We were blocked from campaigning but the music will now do the talking"

Kyagulanyi says for such acts to come to an end, Ugandans have to go vote for change. He says come rain come sunshine, they should go vote for the Umbrella, the symbol for the NUP party

In the chorus, Kyagulanyi asks Ugandans to go vote such that there is change in the country.  He says with the vote, Ugandans can change government which after all is in panic.

Kyagulanyi thanked his supporters for the overwhelming love and support they have showed him during the campaign trail. He says everywhere he goes he has received messages that people want to see a new Uganda and can't wait to have one.

He says the 14 January 2021 vote is very important as it will determine the Uganda that people want. He says Ugandans can redefine the country they want using a vote. He asked them to vote but also stay back and protect their vote.

This is Kyagulanyi's third song since he joined active politics but the first as a Presidential Candidate. He first released Tuliyamba Engune and then Freedom.

The song released on the BEST SHOOTS Official page had by Sunday afternoon already attracted 33,383 views, 2400 likes, 35 dislikes and 336 comments.

A You Tuber under the names of Isaac Wankayz has already made a video in which he shows some events that have happened since Kyagulanyi was nominated in November 2020.